White-nose syndrome map March 2009. Hundreds of thousands of hibernating bats have died since New York Department of Environmental Conservation biologists documented white-nose syndrome west of Albany, N.Y., in early 2007. Biologists with state and federal agencies and organizations across the country are trying to find the answer to this deadly mystery. 90-100% bats are dying We have found sick, dying and dead bats in unprecedented numbers in and around caves and mines from Vermont to Virginia. In some hibernaculum, 90 to 100 percent of the bats are dying. While they are in the hibernaculum, affected bats often have white fungus on their muzzles and other parts of their bodies. They may have low body fat. These bats often move to cold parts of the hibernacula, fly during the day and during cold winter weather when the insects they feed upon are not available, and exhibit other uncharacteristic behavior. Despite the continuing search to find the source of this condition by numerous laboratories and state and federal biologists, the cause of the bat deaths remains unknown. Recent identification of a cold-loving fungus could be a step toward an answer. 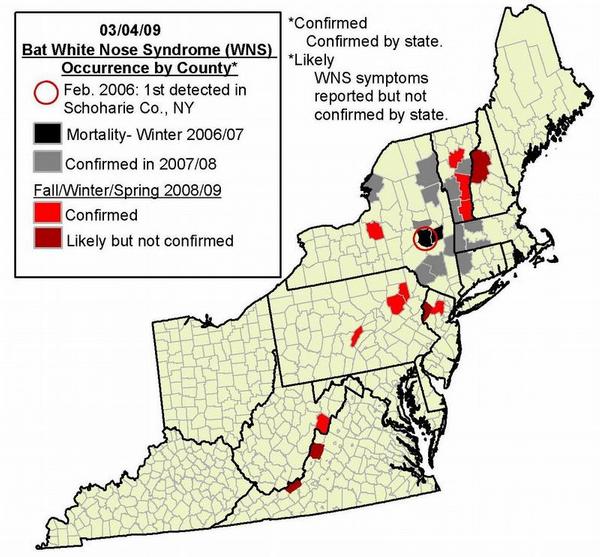 You need to be a member of Wildlife1.Com to add comments!

A fungus that likes the cold ... now, I hope my neighbor shapes up and leaves the heat
on ... otherwise it will be humans going next!

Comment by Charity Harris on March 23, 2009 at 12:10pm
That is just weird. And SAD. I love bats. Well I love bats in the barn and elsewhere outside. I'll get right up close to them and stare at them. However, when there was a Large Common Brown Bat flying around my living room franticingly trying to find it's way out when I was asleep on the couch - I did not like that so much. I was startled & I reacted "like a girl". I went and hid in the next room, behind a 99% closed door and made my hubby open the front door and shoo it out. Then I made fun of myself (my hubby was glad to help me do that too) for the next two months!

Started by susie. Last reply by Catman 6 hours ago.