If all the beasts were gone... A Message From Kimmy 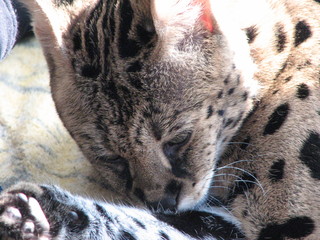 I wasn't young when I came to your home, I'd been dumped at the zoo, to be left alone.

Don't remember the people except the pain. They left me to die here in the cold and the rain.

You were working at the zoo, it was late at night You heard my slight whimper, and shown your flashlight. You took a chance and turned around You entered my cage of cold steel and knelt to the ground. My… Continue


Well, the "dream" is on hold pending the status of the woman
who was going to assist me in my "little outing".
If I can find someone else to fill her shoes the show will go on ...


So, with that -
Here's wishing you and yours a very happy Thanksgiving.


[roses] for the gals, and [props] and trophies for the guys!


With much love and gladness from the Hutto and Gilbert… Continue

Thanks for all the well wishes hope everyone has a good thanksgiving..soooooo fill me in what did i miss?

I had a good weekend wit my girlfriend and carrie we all hang out at machaelz house this weekend... we went to a bar... then watched a few moviez and i think i got drunk or sumfin cuz i was really sick the next day.. ugh but oh well im better now my g/f took care of me ... but thanksgivin is almost hear... i hope everybody has a good holiday!!
~Love&Peace~

Pets and Wildlife in Suburbia

I have three cats. Two of them moved in from the immediate streets as young adult cats. One was saved from a dumped litter in the local stormdrain as a tiny 5wk old. We have a huge feral cat problem in the area. Or rather we HAD.........

When we first moved here there was no birdlife save for a large murder of crows in a gum tree out the back and intermittent magpies. Three of the neighbours left their meat scraps on the doorstep for starving feral cats to take back to their litters.… Continue

today after work i had gotten some bad news i had found out that i had lost a old friend on saturday. Its been real hard for me - hope you all are doing good

ill always be there


I'll Always Be There
In times of trouble,
In times of need,
If you are feeling SAD,
You can count on me.
I will give you a wink,
Until you smile,
give you a hug,
And stand by your side.
I'll be there for you till the end,
I'll always and forever, be your friend!

was in hospital 5 days , lot of pain now , not on pc alot doing pretty good have a home nurse comes in

I cant sleep, because well I've been thinking about the title subject, so maybe this will help me sleep after writing it. I've written this on some other sites I'm on as well.

I know death comes to us all and death in itself doesn't bother me at all. What bothers me is I do not know how people will act when I die. Will they cry, will they laugh, will they care. Also I wont be here to see how many truely cared about me, or what people have to say about my… Continue

So, a new door has possibly opened?


One day I was listening to the music I've composed on my mp3 player while at the church.


Someone was talking to me and wanted to know what I was listening to, so I told them
about me - and my music - but *then* they wanted to hear it ... I think they really liked it!


Then a challenge concerning whether I could actually perform (the songs) and not get fruit
thrown at me, made it's way into the… Continue

well I'm ina huge funk right now. I've fallen to 5-5 ater gettin myself to 4-2. I'm in 6th place right now 1.5 games out of 4th. I happened to play the 4th place team this weekend. It is a must win, as there are only 14 weeks in the fantasy regualar season so to be 2.5 games back with 3 games left is asking too much. This weekend can break my season, or leave me with hope.

Side note. Alls well mostly in life, a few hiccups--- friend had a heart attack (he is just… Continue

I jus dont understand people. but i guess in sum wayz u will never understand bout thingz!!

got my ink. here are the pics:

this side says, "he is not here he has risen just as he said."…

hope everyone has a good weekend im going outta the city til tuesday.Take Care and have fun and remember lil kids you too can prevent forest fires.hahaha..Try not too miss me too much..xoxoxo

Box of chocolates.....now hand em over and no one gets hurt;)

Hugs hope u have a great day xoxoox

About "The Economy" and "Bad Times"


About the economy and bad times:

I'm getting used to how bad things are now, so that if things get
even worse, and they could, I'll not feel so bad about it. :)

I might bother to notice, but - for now - I'm trying to take it all in stride ...
Nothing worse than moaning about "bad times" when I can just make
a few slight "changes" myself, and improve my own situation, right?

If we have to tighten our belts… Continue

its been quite a week for me..I guess it can only get better.Hope everyone has a good rest of the week and weekend.

...just to say Hello to all of my friends!

Thank you for visiting my profile and leaving so nice comments :-) I'm really sorry that I so rarely comment back... I wish I could have more than only 24 hours in a day...

Started by susie. Last reply by Gayle/Mandi Traut 12 hours ago.